On a recent visit to Walt Disney World we found ourselves in need of something refreshing following a thrilling time at the Hall of Presidents. As we promenaded through Adventureland we realized there was only one thing that could possibly follow animatronic Abe Lincoln – a non-dairy fruity frozen soft-serve snack.

But wait, there are two non-dairy fruity frozen soft-serve snacks to choose from. Which one should we choose. Dole Whip or Citrus Swirl? Should we try both? No, that’s ridiculous. Why? Because….

Obviously we had to take matters into our own hands. Using precise scientific methodology we’ve created the five key components most important in determining the validity of each of these soft swirled mounds of goodness to once and for all declare a winner.

Hands down Citrus Swirl is the easier of the two to obtain. That is so long as you’re in Walt Disney World’s Magic Kingdom – the only place in the entire world that I know of where you can get one. 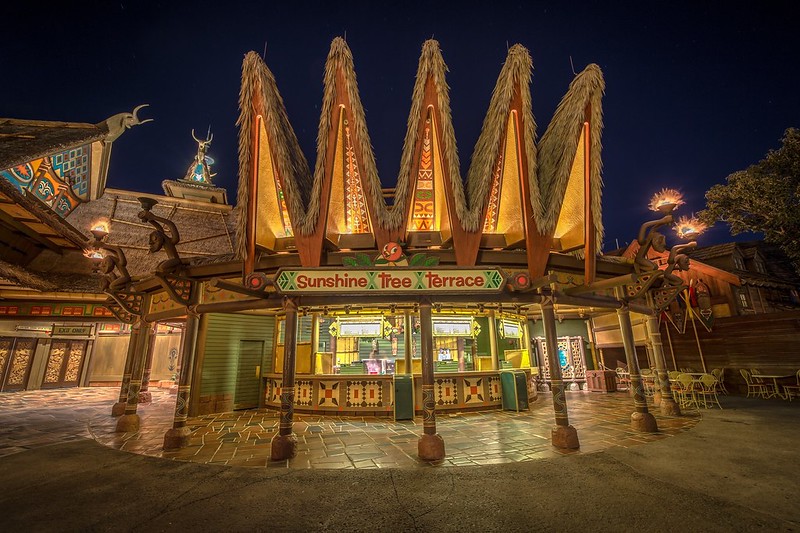 Dole Whip can be found in the Magic Kingdom, Disneyland, WDW’s Polynesian Resort, EPCOT, Animal Kingdom, Aulani in Hawaii, Dole’s Dole Plantation in Hawaii, Peter’s Polar Parlor in New York, and your own home (you can buy the soft serve mix online from the very un-Disney named Unified Enterprises). Yet despite all those easily accessed locales you are almost always guaranteed to have to wait to get one.

This is probably the reason why Aloha Isle and Sunset Tree Terrace have swapped places in the Magic Kingdom, which is a crime against Dismanity if you ask me. Did not Walt Disney originally intend the Sunset Tree Terrace to be located next to the Enchanted Tikki Room? I don’t know. Did he? I assume so. It sounds like something he would do.

When I see all those people standing exhaustively in the long, blazing sun lit lines in front of Aloha Isle I’m reminded of a certain video game.

Then I walk right up to the much shorter lines at the Sunshine Tree Terrace, grab a Citrus Swirl, high-five the cast member working there and comfortably take a shaded seat beneath the Swiss Family Robinson Tree.

Because Citrus Swirl is rarer yet also more available it is the clear winner. That’s just math.

Based off the amount of saliva that forms in my mouth when looking at pictures of each side by side, the edge goes to Dole Whip. 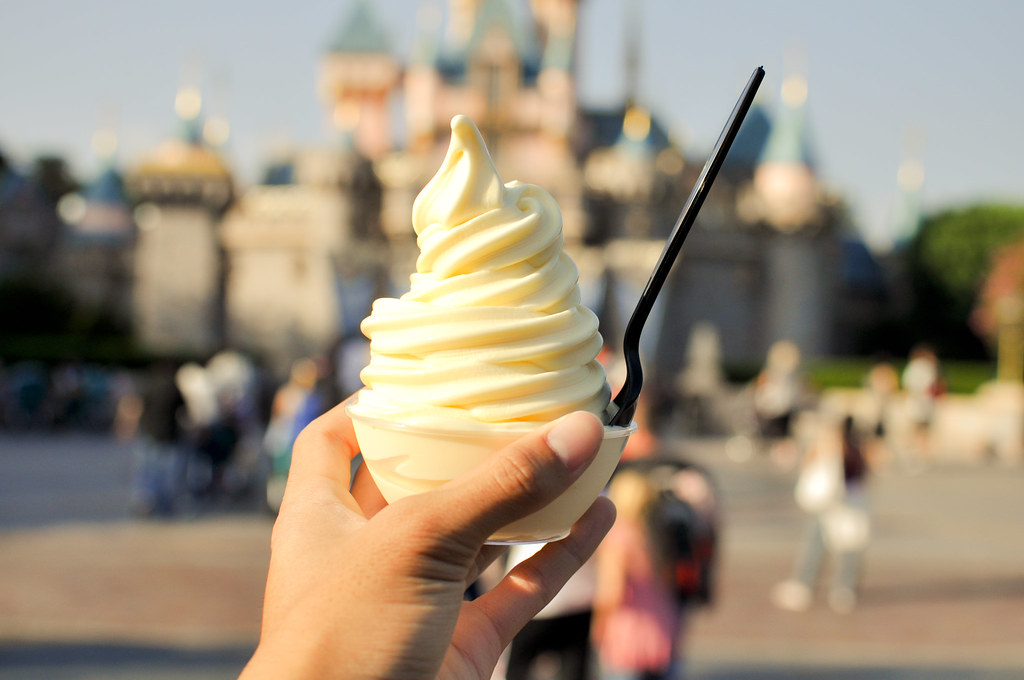 There’s something about it’s difficult to pin point creamy yellowy-orange color that draws you in and dares you to discover what forbidden tastes it holds.

Citrus Swirl on the other hand has the colors of a creamsicle. While this invokes memories of the popsicles I ate when I was ten, it is a whole lot less mysterious looking. 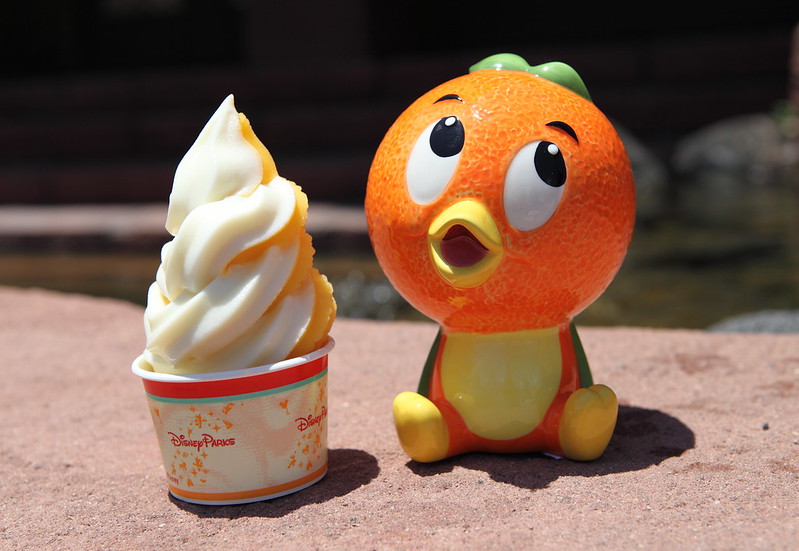 Citrus Swirl also looks a little more processed. Dole Whip looks as fresh as something that is pumped out of a machine can be.

Actually Dole Whip is pretty processed, as evidenced here. (What the hell is Maltodexrin?) But who cares. 1) Those are just words. 2) Everybody knows looks are all that matter.

The way Dole Whip’s swirled peak deliciously droops over is all the ingredient I need.

First off, the fact that Dole Whip has a corporate name at its forefront rubs me the wrong way. For the same reasons I’ll take the Rose Bowl over the San Diego Country Credit Union Poinsettia Bowl, I’m leaning towards Citrus Swirl here.

Secondly, the name Citrus Swirl sounds like something I want to be caught up in. Dole Whip sounds like I’m padding the pockets of the Dole Food Company C-Suite, or eating something endorsed by former U.S. Senator Bob Dole.

Why support an already massive corporation like Dole, when you can purchase an original product from a small, family owned business like Disney?

Even more important, Citrus Swirl has an adorable tiny Orange Bird for a mascot.

Dole Whip has nothing. That is unless you count that cartoonish Dole Whip drawing that looks like they just puréed the Froyo mascot and rebranded it as their own.

Like Figment or Mr. Toad, Orange Bird is a hero of nostalgia, resurrected like so many other presumedly unprofitable Disney properties by the Kawaii cult of Tokyo Disneyland and triumphantly returned to its rightful place at the Sunset Tree Terrace.

Songs have been written about him. Commercials have been made for him. Educational food videos produced with him. Orange Bird alone is reason enough to declare Citrus Swirl the outright winner.

Although when it comes to true marketability, you have to go with Dole Whip on account of all its posters, clothing lines and Vinylmation collectibles.

Then again it looks like Dole Whip once tried to steal the Orange Bird, turn its head into a pineapple and pass it off as its own mascot.

This round goes to Citrus Swirl.

Just kidding. We don’t run that kind of website here.

Besides, everyone knows calories don’t count in Disney.

I don’t know about you, but I wouldn’t mind an extra 40¢ in my pocket.

(Though in my opinion both should be free and come with the price of admission and handed to me by a cast member when I enter the parks.)

Last but not least, we come to taste. The test by which all foods are judged.

Although it only tastes like a creamsicle when you combine both its tarty orange and vanilly vanilla. Eaten separately each has its own unique flavor. What you’re left with is three entirely different soft serve experiences. Triple awesome.

The Pineapple Dole Whip tastes like, well, pineapples. Sweet, delicious creamy pineapples. You know this because of all the pineapple imagery nearby. Also, because of how it tastes in your mouth. 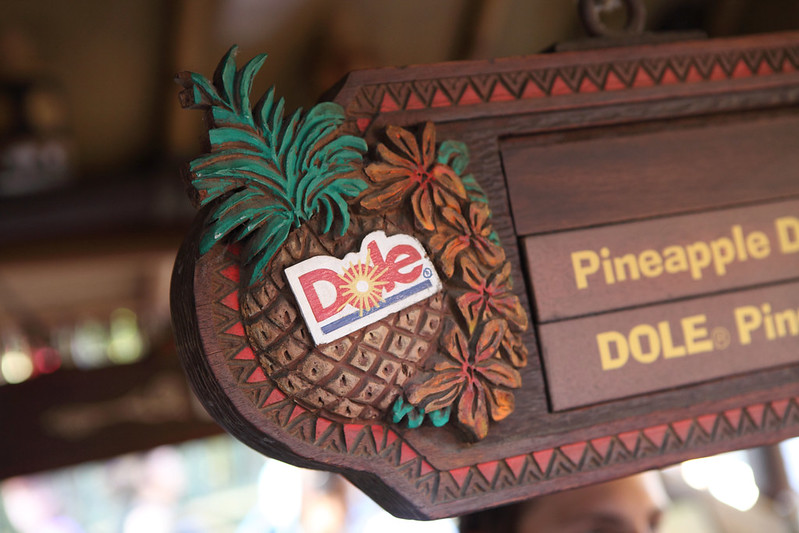 Light and refreshing, Dole Whip is unlike any other taste in the entire world.

So which one is more delicious? This is a tough one since taste can be subjective and they are so similar yet so different, but….

Dole Whip. Although creamiscles are awesome, a lot of things taste like them. On the other hand nothing tastes like Dole Whip.

Tallying up the results from all rounds we are left with a score of Dole Whip: 2, Citurs Swirl: 3. The winner of Dole Whip vs Citrus Swirl is:

Argument over. Next up: