A few years ago while in Barcelona I was hoping to realize a longtime goal of drinking some real deal absinthe. After spending the better portion of my nights going from bar to bar asking and getting nothing but quizzical Catalonian looks in return, I arrived at the confident conclusion there must not be any in all of Barcelona. After my most recent visit however, I learned how wrong I was.  Turns out all I had to do was check into the very first bar ever to open in Barcelona which, fortunately for everyone, still serves up the green fairy on a nightly basis.

One step inside Bar Marsella and you immediately know you’ve come to the right place. The paint on the ceiling is peeling, the mirrors are caked with grime, the walls yellowed by tobacco smoke and the chandeliers covered by more dust than you’re likely to see in the most abandoned of spaces.

On our first attempted visit we actually thought it was closed on account of the lights being off, the windows covered by metal shutters and all the scaffolding blocking any practical means of access. But it turns out we were just being old because it doesn’t open until 10pm (although even that’s not written in stone). So if you hear that it’s either closing permanently or has already closed, reports of which there seem to be no shortage of, ignore them. Bar Marsella is operating in fine form, you just need to know when to show up. 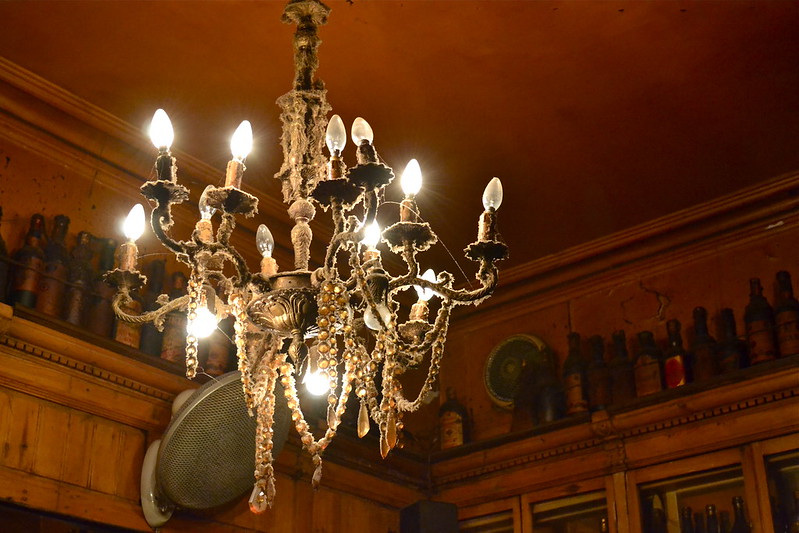 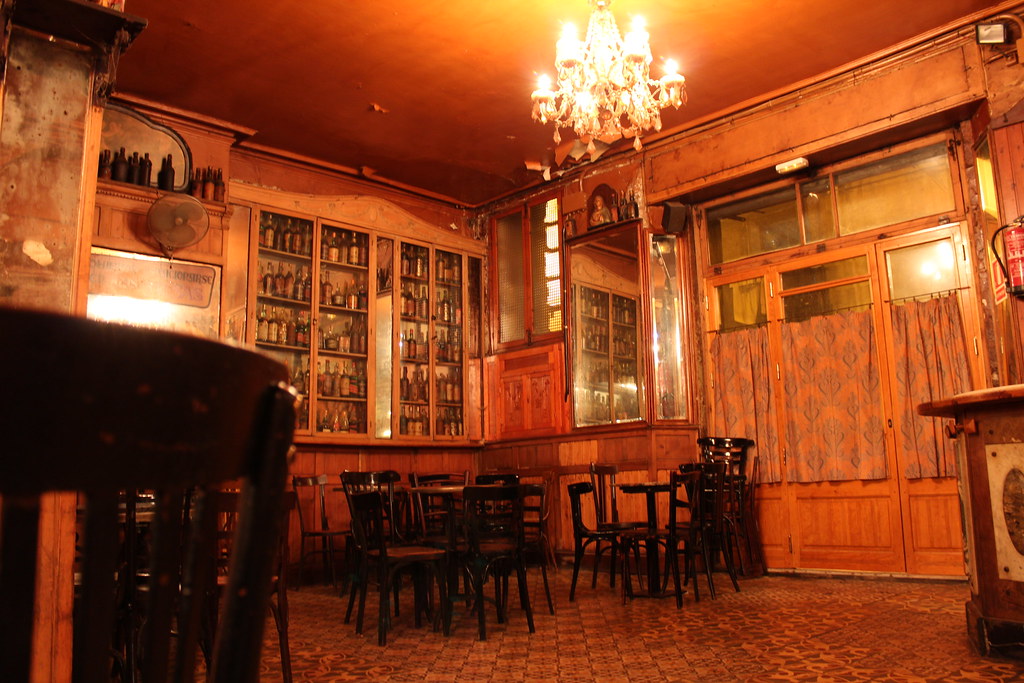 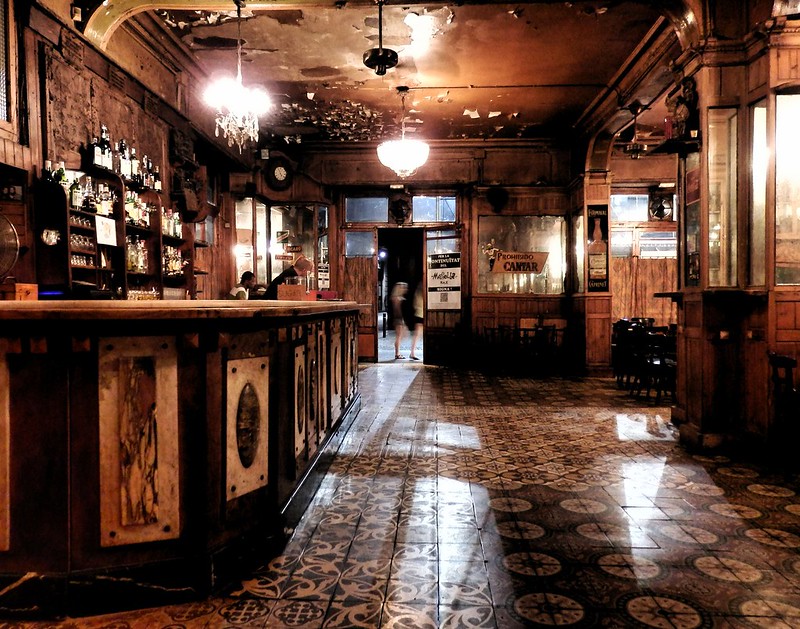 Bar Marsella opened in 1820 and is reputedly the oldest bar in Barcelona. Judging by the bottles lining the walls, which look like they haven’t been touched in nearly 200 years, this seems like a safe bet. Found all around its interior are remnants of this history. The Prohibido Cantar sign hanging on a mirror is a a leftover from the dictatorship days of Franco forbidding singing. So is the Prohibido Estacionarse en las Mesas sign over the entrance forbidding groups of four or more from congregating at a single table, which in those days was a sure sign that a revolution was afoot.

Drew Smith, My Year With Hemingway

The bar was also featured in Woody Allen’s Vicky Christina Barcelona and, more importantly, in an episode of The Young Indiana Jones Chronicles during which Young Indy, on a visit to Barcelona in 1917, defeats several Nazi spies through the help of his friend Pablo Picasso. In fact, the current bar countertop is not the original from when the bar opened but instead a replacement specially made for the filming of the Indiana Jones episode at the bequest of George Lucas.

But perhaps most of the establishments’ fame (Young Indiana Jones aside) comes from the clientele who are said to have frequented it at one time or another, such as Hemingway, Gaudí, Picasso and van Gogh. Any tour book you read will undoubtedly point this out and it’s easy to imagine that at one time Picasso and Hemingway sat across from each other at one of those rotting tables toasting to their eventual impact on the tourism industry.

The bar is located in El Raval, the more colorful counterpoint across Las Ramblas to Barcelona’s more traditional, and touristy, Barri Gòttic. An area once infamous for its nightlife and less than savory occupants (who still patrol the street across from the bar), El Raval is actually one of the more exciting up-and-coming areas of Barcelona. Home to some of the best prices and most enjoyable places to experience, a visit to the areas’ oldest inhabitant is no exception.

Like any self-respecting establishment Bar Marsella has no menu. One of the men behind the bar (bartender may be too generous of a word here) offered us three things to drink: absinthe, beer, and something else that I didn’t pay any attention to because I had already heard the word absinthe. We were told to sit down and a few moments later a glass of spirits, a package of sugar cubes, a stubby fork and a bottle of water with a small punctured hole through its cap appeared on the table. 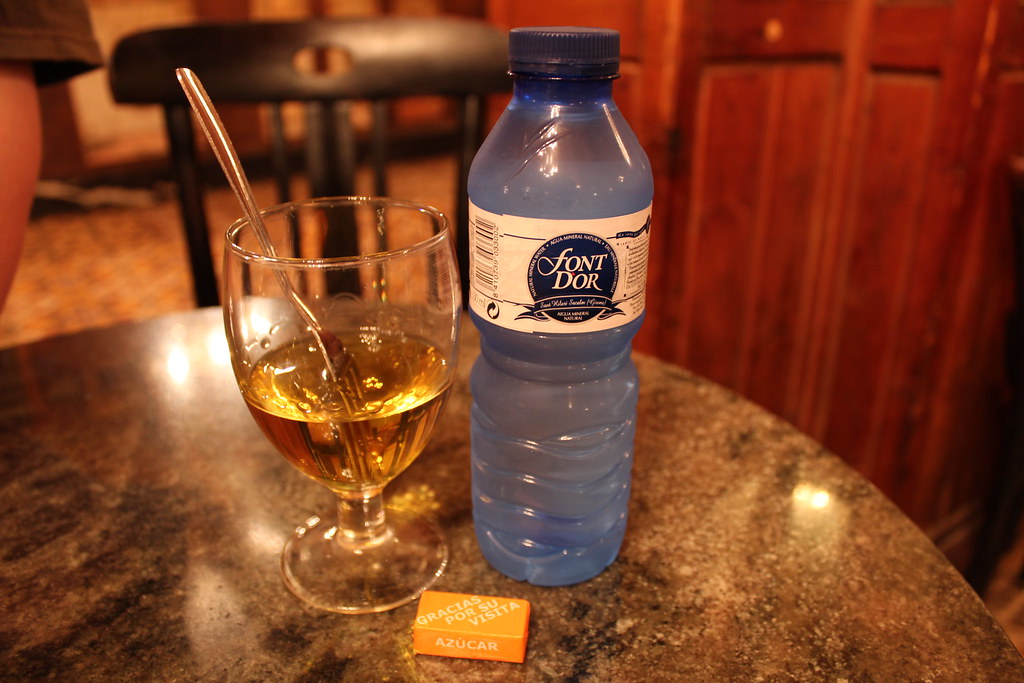 We were told how to prepare the drink properly. I pretended to understand and then went to work. Before the water could even reach the sugar cubes the man had, I can only assume, leapt over the bar and quickly ripped the water bottle from my hands to take over the operation.

How to properly prepare an absinthe at Bar Marsella:

2. Place one (or two) of the sugar cubes on top of the fork.

3. Squirt water from the bottle on to the sugar until it completely dissolves into the drink.

4. Remove the fork and enjoy.

If done correctly the color of the drink should change to a cloudy, almost glowing, tint of green. Although many recommend you indulge in this ritual and slowly pour the water over the sugar, Bar Marsella has little respect for such traditions and seems instead to try and melt the sugar with as much force as possible. You might also see some dipping the sugar in absinthe and lighting it on fire, but this really doesn’t do all that much except provide an excuse to play with fire. Below is a video (in Spanish) showing how it’s done, along with a good look inside the bar and an interview with the owner José Lamiel.

In Bar Marsella’s elegantly poured glass of absinthe (or la fée verte, as she is known to her better friends, which by now I undoubtedly was) I had finally found the real deal. It was quite enjoyable as far as drinks that can make you go mad go, complemented quite nicely by the ramshackle of a bar it came in. Sure a piece of the ceiling could fall into my drink at any moment but at 5 euros (which includes the water bottle) it was well worth it, and I was pretty pleased to have finally tasted this mythical Barcelonian spirit.

All that was left to do now was wonder when I would start hallucinating.1