Be sure to check out our three other posts covering the San Fermín Festival: Partying in Pamplona, Opening Day Encierro and Surviving Running With the Bulls.

Somehow, at one time or another, running with the bulls moved to my bucket list. There’s really no concrete reason for this, nothing I can point to where I just said, yeah, life threatening situation sounds great, sign me up. But nevertheless, there it was at the forefront of my mind each time the opportunity to travel presented itself – and once it is there, that’s it. So, when the morning of our run arrived, it was kind of amazing to have finally made it. Of course, this feeling was quickly overcome by an equally powerful emotion – the sheer terror of potentially being gorged by several 1,300 pound pissed off bulls.

Deadly bull horn fears aside, the time had come. We had walked the course, bought the uniform, set the alarm and found ourselves waiting for our bus into town at the ripe hour of 5:30am. Once there we followed the masses to the town square where we all waited closely pressed together, nervously trying to pass the next hour and half in good humor.

What is the Pamplona Encierro?

Running with the bulls is translated as Encierro in Spanish and is the practice of leading several bulls from the outskirts of Pamplona’s old town into the corrals of the Plaza de Toros arena, where they will “participate” in bullfights later that day. There are eight bull runs in total, occurring once per day at 8am during the San Fermín Festival from July 7th through July 14th. There are usually 12 animals - 6 bulls and 6 steers - that run a set course of 826 meters (0.5 miles), taking anywhere from around two to six minutes to complete.

On some very good advice we made it a point to start in the Plaza Consistorial (where the Town Hall is located) as close as possible to the starting line where the square meets Calle de los Marcaderes. Anyone trying to start their run past this line will be removed from the course by the police around 7:15am, who sweep the streets outside of town square to decrease congestion. It’s also around this time that they begin to assess the crowd, removing potential runners who are drunk, disorderly or a bit over zealous with the pictures. How strict the police are really depends on the officer and the day of the race, though they all seem quite determined to remove anyone who might have video recorders and several people had their GoPros confiscated. Fines after the run for outrageous behavior do occur and as such, selfies are not recommended.

Unfortunately, all this also means that instead of everyone being spread out across half a mile of streets, the majority (i.e. several thousand) are tightly squeezed into this very small square. Since we were also advised to get there well in advance of the start of the run (at least an hour and a half), there was plenty of time to second guess what we were getting ourselves into.

We had learned that the word encierro is derived from the Spanish verb encerrar, which means to “lock in” or “to pen”. At its core this event may still be for some, a means of helping to transport bulls from one end of the city to the other by running behind them and directing their route. But somewhere along the line things seemed to have gotten reversed and a whole lot more stupid, with people now running in front of the bulls. Standing there in a human holding pen it was not difficult to start questioning who exactly was corralling whom.

To make matters even more questionable a large screen in the square looped a version of this overly foreboding video:

Stronger than the hint of dreadful anticipation was the overwhelming feeling of excitement of just being there. It’s not every day you get dressed up head to toe in white, don a red sash, and take part in one of the most revered events in the world. Since everyone in the square is in the same boat and a majority, like us, were not locals, a certain level of camaraderie was immediately present that made the experience all the more enjoyable. We formed a group with several guys from our campsite and between our joking and talking about this insanity, the time passed quickly. Also helpful was the fact that one member of our group was exceptionally tall and could easily look over the crowd to keep us up-to-date on everything that was happening.

About 20 minutes before the run, the police clear a path through the thick crowd for the professionals, many of whom train all year and run every day of San Fermín. As they saunter through the crowd to take their place along the route before the rest of us and everyone starts clapping, it’s hard not to look on in awe.

Around this time the chants to San Fermín begin. Just before you are let out of the square to find your spot along the track you may suddenly realize that everyone in the square is saying what sounds to be a prayer. It is recited several times  prior to the start of the run, right up until the last minute, and originates on the sloping road of Cuesta de Santa Domingo, a few meters away from where the bulls are kept. The runners standing there raise their rolled newspapers in salute to a statue of San Fermín recessed in the wall of the street and chant:

“We ask San Fermin, being our patron saint, to guide us in the bull run and give us his blessing.”

After they finish singing each time they shout, “Viva San Fermín!, Gora San Fermín!” You will probably miss most of this however, since you’ll have other things on your mind (namely deadly bulls) and toward the end you’ll be too busy searching for a starting point along the street. 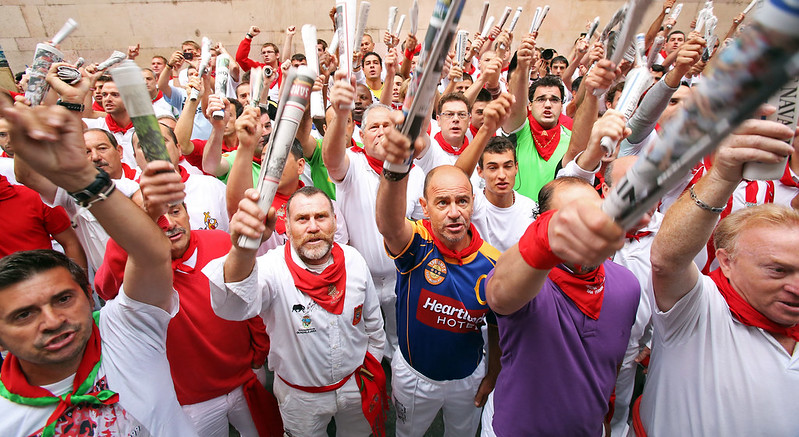 At 7:45am, roughly 15 minutes before the run begins, we are freed. At this point the thousands who have been waiting in the square are allowed to walk/jog/sprint along the now-cleared route to choose their starting point. 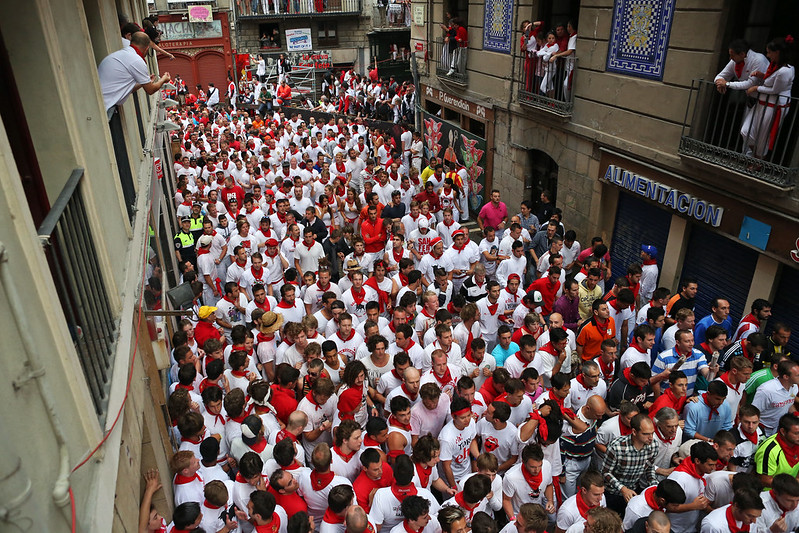 How We Picked Our Spot to Run With the Bulls

Although some wing it the day of, others, including ourselves, take some care to decide where they start. We chose a spot about halfway up the long straightaway of Calle de la Estafeta on the right side, about an arm’s length away from the wall. Estafeta is a relatively flat straightaway and because the bulls’ front legs are shorter than their back legs, they will not run as fast here as they will in the beginning where the course is steeper. Being halfway up gave us enough time to see the bulls and the possible option to adjust our position if needed. Since the bulls take turns wide there is a better chance that they will hug the left side of the street after Dead Man’s Corner, so we stuck to the right side. Being at least an arm’s length away from the wall helps avoid other runners who have positioned themselves there. The side of the street we chose was also appealing because it had several doorways, pipes and overhangs along the wall that we might wedge into or hang from if worse came to worse. Be careful though, if you start at Estafeta and run before you see the bulls, you’ll arrive at the Plaza de Toros well before them and be greeted quite poorly by the crowd. There is also the possibility that if you leave too early you’ll get stuck in the dangerous bottleneck entering the arena. All that said, you can only plan so far. The bulls can be unpredictable and the spot we chose had just as good a chance of catching their full force as any other. Nothing is a sure bet.

This is the moment when the gravity of what you are actually doing hits hard. 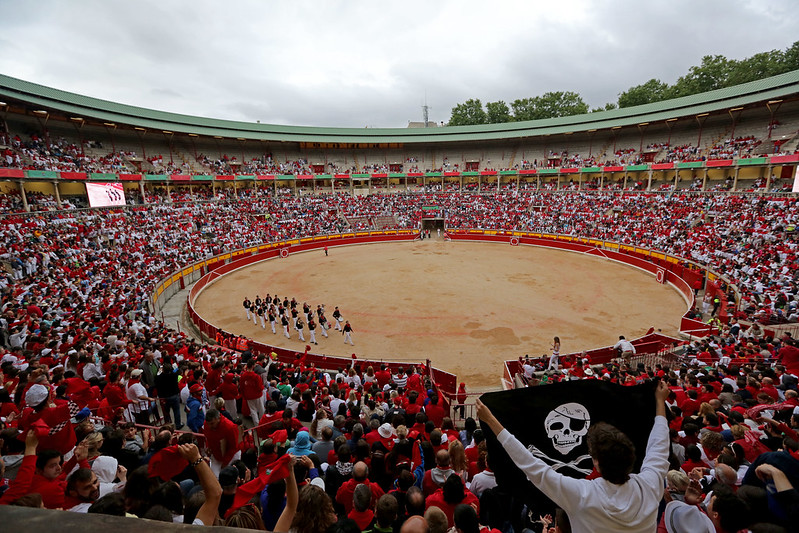 Next… Surviving Running With the Bulls

Disclaimer: While some of the above images were taken by us, some were not. Several are from previous years of San Fermín and were used to help best tell the story of the festival visually. A special thanks to Jonan Basterra and all our friends for contributing to this post.